Dad/Baby Boomer and daughter/Millennial (and coworkers), discuss the generation gap. Why can’t millennials and older coworkers/ bosses just get along? And are they really all that different?

Nora Philbin: Why do older workers and leaders hate millennials?

Nora: Did you remember that “Time” magazine cover? Have you seen the memes? We’re all nightmarish narcissists obsessed with our selfies and 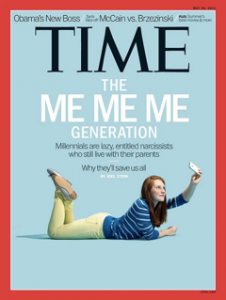 But seriously, I think there is a cultural idea that has caught on that millennials want to shake up the traditional roles in the workplace. And when I was doing research for the magazine, I noticed a lot of issues people note around generational miscommunication and a lot of jokes and memes and things. And not just miscommunications but millennials not wanting to deal with their older bosses and older bosses not being able to deal with millennials. You talk to a lot of people who lead companies, and people from your generation, and so I wanted to get your take.

John: So, in the work that I do with people who lead companies I do find there are some real negative feelings about millennials. One of the words that people often use with millennials is that they are very “entitled.” A line I have heard from different quite a number of people my age goes something like, “Millennials think that after six months they should be running the company or running a department.” Another complaint is that people your age don’t want to work within the company’s system and rules, they want their work to fit their life rather than managing around their work.

I think of them as impact junkies. If they’re in a job where they don’t feel like they’re having an impact, and they’re just doing some work and they don’t see how it connects to some positive outcome, they don’t want to be the people in that job.

John: Yes and no. When I ask people what they mean by being entitled, I get a couple of things. One is, I hear a lot of conversations about the fact that millennials would like to renegotiate their work, so that their life and work fit together, but no one that I’m talking to complains that millennials want to work less.

When I dig in and have a real discussion about what’s behind the complaint, I hear that millennials idea about what is a fair deal is different than it was for people my age. Millennials do want flexibility that if there’s some cool online course or other meeting that is cool or important to them that they can go to that, especially if it makes them better at their job, but even if it just makes them a better citizen of the world. They see their work as a part of their life rather than that thing that happens only from 8-5 that they have to work their whole life around. This is the generation that never didn’t have mobile devices that allow them to access whatever they need wherever they are whenever they need it. So millennials are looking for a way to negotiate living their life and doing work that they care about. But I don’t hear complaints that millennials are lazy and don’t want to work hard at work that they see as meaningful.

Nora: I know that’s how I want to and try to create my work.

John: What strikes me about millennials as a group is that they really want to have a bigger impact NOW. I think of them as impact junkies. If they’re in a job where they don’t feel like they’re having an impact, and they’re just doing some work and they don’t see how it connects to some positive outcome, they don’t want to be the people in that job. And that’s what people call entitled, and you know, a lot of companies need to question, why are there jobs that people don’t feel have a direct impact? So, it seems to me that what younger workers feel entitled to is having an impact on the outcome of the company. Sure, like every generation before they’d like higher pay and they’d like to move up faster, etc. But when I dig beneath the surface, I think there’s a real opportunity here because the goals of motivated millennials and baby boomers and gen X-ers are all aligned. Everyone wants to know their job makes a difference and make the company successful.

I think you should want people to participate in a lot of different parts of your business and have jobs where they actually think. If they have work that really requires their investment, well then, they’re invested in your company and they’re going to be much better employees.

Nora: Yeah, from my point of view as someone just starting out I don’t understand why a company would hire somebody who’s not going to add value. If you don’t need someone to do something that helps the company, why did you hire them? What did you see in them that made you want to bring them into the company?

John: And of course, it’s just not as simple as companies hiring a lot of people they don’t need and having them do work that doesn’t need to happen. Though, a lot of the work in lean and process re-engineering has certainly shown us that there is more of that in our companies than we would like to admit. What often seems to happen is that there is some work that is not very stimulating, is often somewhat repetitive and isn’t that fun. When this work is really necessary it is generally assigned to the least experienced and lowest paid folks and those are usually your classmates, not mine. In my day, this was called “paying your dues” and I do think there is an aversion to “paying dues” with work that no one has explained to them why they are doing it.

Nora: There’s also this whole thing that I hear which is, “They [millennials] need to understand reality,” but we don’t because we got participation trophies for everything we did when we were growing up. I disagree, and I think you should want people to participate in a lot of different parts of your business and have jobs where they actually think. If they have work that really requires their investment, well then, they’re invested in your company and they’re going to be much better employees.

John: The thing you said that I think is kind of interesting there is, “They have to learn reality.”

Nora: Do you think the criticism that we all got participation trophies, even when we weren’t good at soccer or piano  gave my generation a distorted sense of reality? Or just a different one?

John: So, I have a very different take on this, and I don’t really know whether it has to do with participation ribbons or not. My sense is that millennials are asking for their work reality to be a good reality for them. I also think that they get that they may not be able to get it at the company that they are currently at, but they try to make their job better, and they try to tell their bosses, people like me what they need to make it good for them. I think they’re more willing than previous generations to say, “Ok, then if this is all there is I’m just going to look for something else.” And I think that throws people my age off. We want young people to “pay their dues” in unfulfilling jobs like we had and move up gradually to work that actually engages them, you know, someday.

Nora: But does it have to be that way? Do the jobs where people my age “pay their dues” really have to be mindless?

Millennials are asking for a boss who is proactive in thinking through what work needs to be done, what’s the best way to get it done, how do we avoid stupid work that needs to get reworked. They are asking for their boss to understand and explain to them how what they are doing is valuable. This is what a great boss does. A great boss sells you on what you are doing, even if it isn’t that fun, because it’s important or because it’s a good skill for you to learn, which will help get you promoted in the future. So, I think that when millennials are asking for these things that probably seem like the basics to them it shows up the manager a little bit. It shows that they aren’t really that great at being manager. I think bosses don’t like millennials because they are pushing them to be a really good manager and at a lot of companies it’s hard to be a good manager today.

What do you think about this? We have so much more to say on this topic. Is there anything you want us to cover for part two?

Nora is a co-founder of Happy Spectacular, which she still can't really believe, and she's on a lifelong quest for the world's best cheeseburger (applicants accepted).

What’s the Deal with Informational Interviews?

Here at Happy Spectacular, we are really big fans of the informational interview. We believe that no one has a successful career alone, and the more people you connect with in your career, the better. As often as possible, we do our best to act as the facilitators for informational interviews for our clients, acting … Continued