And does it include thin leather ties?*

Saddle up for one of the most impactful discussions of our time, kids – something I’ve decided to call Stupid Stuff that Unfortunately Matters. Today’s riveting discussion revolves around the seemingly trivial matter of the business casual costume we wear in work-related settings, and how something as simple as wearing the wrong shade of denim can potentially turn into a career-limiting move1. In a world where you’re being judged for what you wear (to an interview, a Thirsty Thursday team night, your industry’s networking breakfast, day one on the job, or Marjorie’s retirement thing) as much as the words you use, there’s nothing casual about business casual, so brushing up on some do’s and don’t’s can’t hurt.

What exactly is business casual?

The obvious part is that it’s the merging of two important looks: the Capable Professional with the Approachable Every-person. Business casual done right shows you’re the utmost professional without being uptight (or worse, boring). Sounds good, right?

Where it gets tricky depends on what kind of organization you’re dealing with, where you’re going, who will be there, and (perhaps most importantly) what you want to say about yourself.

Generally speaking, business casual for men means a shirt with a collar (dress shirt with top button undone, or a well-kept and non-wrinkled polo shirt), knit shirt or sweater worn with slacks or pressed khakis and loafers or dress shoes that cover all or most of the foot. It can include a sport coat (especially for evening business casual events). Business casual for men does not include suits or ties, and dress shirts are usually paired with more casual pants (or sleeves are at least rolled up to convey the, “I’m casual!” message).

Business casual for women means a blouse, knit shirt, sweater or cardigan worn with slacks or skirts. It can also include dresses (with hem lengths not much above the knee) or fitted blazers.

Things to Ask Yourself to Help Decide Where to Dress on the Business Casual Continuum:

What’s the culture of the company?

If it’s a traditional institution, err on the side of overdressing. Business casual might still mean a relaxed tie (not a wacky tie with a scene from a Van Gough) but no jacket in an old-school bank or law firm. Really, if your company is referred to as an “institution,” it’s a clue to tone down the casual part of business casual. Also, any time the company you work for has a lot of mahogany furniture and wood-paneled walls, on purpose, it’s wise to dress more conservatively.

If it’s a creative environment, the rules change a bit. Becka Bates, CEO of BatesMeron, a Chicago-based branding and marketing firm says, “It always surprises me that candidates try to hide their tattoos and remove their piercings before an interview here. They quickly realize it was unnecessary. After all, isn’t it true that part of the reason to pursue a creative career is to be expressive?” We here at Happy Spectacular say in situations like this knowing your audience is key.

In a more fresh-faced start-up you can do less with the wool slacks and more on the dark denim. (Save the requisite hoodie for after you’re hired, perhaps.)

Where is the event?

Going to a networking event held at a polished members only club? Veer towards the dress shirt with an undone button instead of the golf shirt you’d wear to the “Sad + Sorry Dave & Busters Forced- Fun Team Building Night.” (Sigh.) If it is in the evening, a blazer or sport coat is a good idea.

Who else is going?

If senior leadership or a big whale of a client you’ve been hoping to land will be in attendance, upping your business casual standards might be wise. Dress at their level or slightly more conservative to create the impression that you mean business.

If you’re the boss, throw your team a bone and dress on the more casual end of the business casual scale from time to time, since the rule of thumb for most employees is to match their level of dressiness to yours. It’s hard to work for a guy who says business casual with his mouth but wears smart casual on his body. (Smart casual takes business casual up a small notch towards conservative on the dressiness scale. So, adding a blazer qualifies as smart casual, for example.)

What kind of person are you?

If your choice of clothing matters as much to you as climate change does to some U.S. presidents2, then a simple rotating uniform of khakis and plain (pressed or at least not wrinkled) collared shirts won’t stifle your creative sense of self. If self-expression is your oxygen, then you’ll clearly be the one pushing the business casual limits with colors, textures, and creative combinations.

As wild as you want to get, remember that the goal is to appear professional. Bates adds these poignant words of wisdom, “I appreciate when I can tell that someone put thought into their appearance. While dress codes aren’t relevant, it’s nice to see candidates show respect for us, and more importantly, for themselves. If your form of self-expression is to show your leg tattoos, that’s great, but if your cheeks are hanging out of your skirt/shorts, you’re showing a lack of judgment.”

What’s the deal with denim?

Jeans are so divisive (unless you work at Levis where it’s probably very okay to wear the Canadian Tuxedo all week long). If your company can handle them, follow this advice from Pritha Prabhakar at Forbes, “Most jeans suitable for office wear have four traits in common: They aren’t ripped or disheveled in appearance, they have a uniform color (dark, usually), they are made of a thicker grade of denim (called “selvedge”) and they fit properly (not too tight or too baggy).”

What should I NEVER wear in the world of business casual?

I am going to a beachside work conference where ‘Resort Casual’ is the expectation. Please translate. 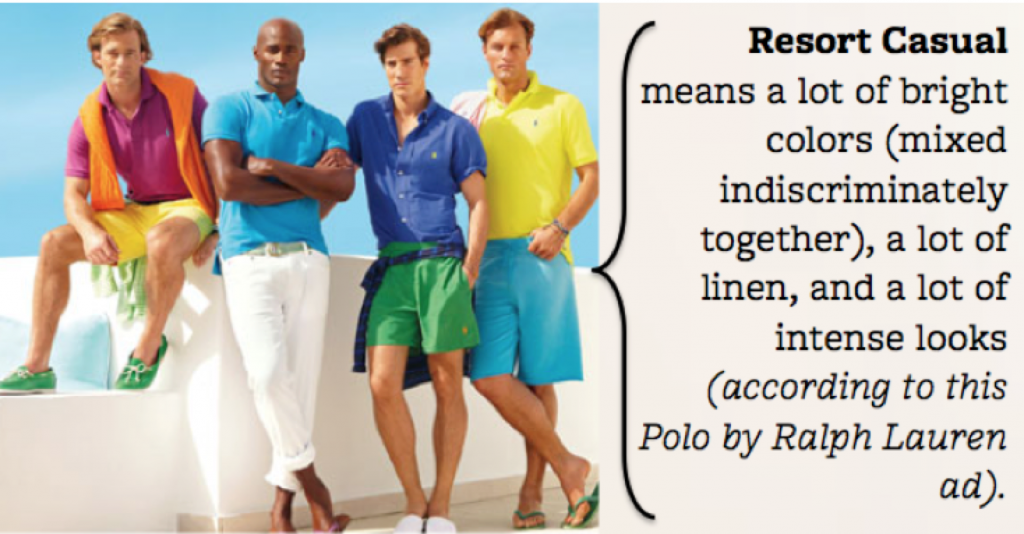 Resort casual, one of the most bizarre genres of work costumes, was likely invented by Ralph Lauren and Tommy Hilfiger one night after conspiring, scotch glasses swirling in hand, how to create a business out of business casual with their consummately preppy clothing lines. “Let’s tell people to dress ‘resort casual’ when they win incentive trips to Cancun”, slurred Ralph, after a few too many. “Think of all the green deck shoes we’ll sell.”

1True Story: a former colleague is 94% certain her light-colored jeans cost her a promotion, whereas the successful candidate for the big gig (aka: her now-nemesis) always wore dark denim.

7 responses to “What Exactly IS Business Casual?”