How a Stapler Taught Me Not to Settle

Published On: July 27, 2017By Jodi WellmanCategories: Everything Else

It started back in 2011, on a late-fall day near the tail end of an unreasonably gloomy stretch of rain and sleet. I remember sitting in my office, acknowledging the initial stirrings of career disenchantment (a feeling not a lot unlike indigestion mixed maybe with the way it feels to have a missing limb hurt at night; you know the leg is gone but it still doesn’t feel right, you know?).

I was stapling stupid pages full of stupid content, strangely lulled by the mind-numbingly mundane task, until the stapler did something inexplicable:  it had the nerve to run out of staples. I distinctly recall being shocked, because it was 2011 and shouldn’t staplers have been self-loading by that point, and also, who has staples anymore?

I somehow found a box in the sad little office supply room (probably the most fulfilling part of that day other than heating up whatever it was I brought for lunch) and carefully loaded a pristine row of 200 staples into the stapler, thinking (possibly out loud) the most profound thing to have come out of my mind since the 90’s, “I’d better not still here by the time I have to re-load this stapler.” The challenge was on. I beamed with optimism.

Move ahead to 2012, on a stunningly beautiful summer afternoon – the kind that makes corporate workers everywhere steal wistful, furtive glances out of their office windows rather than just, you know, go outside. (Even prison inmates who get a bit of yard time each day.) Sitting in my office, yet again, I remember stapling a mind-blowingly boring page to an even more mind-blowingly boring page, then feeling shocked by the sudden lack of stapling performance. Why? The staples were out again. Didn’t we just load 200 of these guys into this thing?

Downtrodden, I reloaded my stapler, feeling another part of my soul crumble off and die while whispering softly to my filing cabinet, “I’d better not still be here by the time I have to re-load this stapler.” Deja vu never feels good.

It then turned into 2013. Near the end of the year on an oppressively cloudy day not brave enough to just get on with it and snow, I remember sitting in my office after 8 p.m., so excited to be at the office so late! The circumstances don’t really matter here, because we know what’s coming next: I ran out of staples, again.

I slowly re-loaded the stapler, feeling what small little bits of pride I had left inside of me ooze out like the hot lava of defeat. And I thought once more, “I’d better not still be here by the time I have to re-load this stapler,” but I have to admit, my confidence was waning.

Fast forward to today: 2017.  I love what I’m doing now, and I somehow manage to escape traumatic flashbacks when I re-load the stapler – which I still keep in the top right drawer of my desk at home (Yes, I stole the stapler. We have a history, after all).  This isn’t a tale of hanging in there like a kitten on a branch, or of hanging in there at work with blind hope as your strategy. This is really a tale of regret. I had a guttural desire for things to be better at work, and I was too busy and scared to make a change. 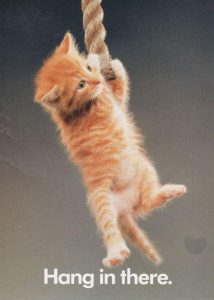 And then I felt worse about myself every time I let 200 staples pass me by, ultimately spending three years of my life certain it was so much better on the other side of fear but unsure how to get there.

I like to think I learned my lesson — that it’s just not enough to let good intentions and hope for more get me where I want to go — but I keep the stapler close to keep me honest. It represents the need to take action and to not settle, even for a single staple. I learned (and continue to remind myself) to live the life I’ve imagined by actually doing something about it, not just waiting for it to happen to me.

I wish I did it sooner.