What Does It Look Like When Your Career Makes Your Life Better?

Published On: February 21, 2018By Jodi WellmanCategories: Everything Else

I take a lot of notes during sessions with clients (mostly so I can use their words against them later*), and so I have this lovely collection of lines that people have uttered at various phases on the fear-to-fantastic spectrum.

The fear-based lines emerge when people know they need to do something about their job situation but find themselves in the vice grip of fear. These quotes are often poignant and more-often-than-that downright amusing (like the time someone said “I’m getting ready to start to maybe think about making a change, but not anytime soon”**). And then with a little coaching, they start to feel a little less nauseous, then a little braver, then that aura of possibility that surrounds them as they land that job that clicks. There’s nothing more intoxicating than the lines from clients who have deliberately moved themselves to the fantastic end of the spectrum, which I want to share with you here. Having a job that makes your life better– not worse– is a reality, not a pipe dream.

This line takes my breath away, every single time. 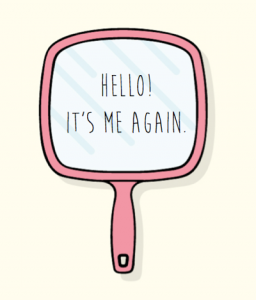 Janine***, a fun and talented Happy Spectacular client living near Toronto, recently made a career path adjustment that took her out of a role that left her exhausted, frustrated and uninspired at the end of each day. When I asked how she felt in the process of leaving the joy-killing job and scoring the new full-of-potential job, she said without hesitation: “I feel like I’m myself again. I have my life back.” Working at a job that chips away at your soul is a recipe for a colossal identity crisis. What does it mean to you to “feel like yourself?” Many of us have lost touch with what that even looks like. Where could you be even more of yourself in life? Is your career edging you closer to being whoever that real self of yours is, or is it edging you off a cliff?

The whole cloud nine thing sounds a bit cliché, right? Imagine for a second that you’ve been in a role for 10 years, like Happy Spectacular client Martin in Seattle, where the first five years felt right and the second five years felt like a slow and steady downward spiral. After his girlfriend pointed out that his persistent malaise made him (almost) no longer dateable, he was forced to look at the impact his job had on his life. “It was such a gradual thing, and there wasn’t one specifically horrible thing that happened to make me leave.” After working on his career path for a few months, he took an opportunity in a start-up within his field with more flexibility and ultimately more opportunity. Martin didn’t know how bad he had it until he had something spectacular to compare it to. Where in your career are you not seeing the forest for the trees? What cloud are you on at work right now, between one and nine?

“This job is like a tattoo; I could keep it for life.” 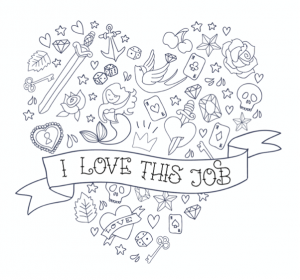 After landing the job, not just a job, client Brad from New York uttered the quote above in a flurry of relief; finishing grad school and taking a series of “starter jobs” left him feeling hopeless about finding work that made him feel as smart as he really was. After landing at a firm that treated him like a human, and managing his own expectations about what it meant to ‘pay his dues’, he mused about how permanent he could see his newfound job in his life. (Because we did our work on the phone, I never had a chance to see one of the many tattoos he apparently had inked into his appendages. We totally should have Skyped.) You might not want to make your job permanent on your skin, but would you be happy to stay forever? And if not, what’s keeping you from making a change?

Some of us think we can either have a great life or a great job. And then we meet someone who has both, and we either think they are from Stranger Things or we believe the dream is real. We are here to tell you: the dream is real. 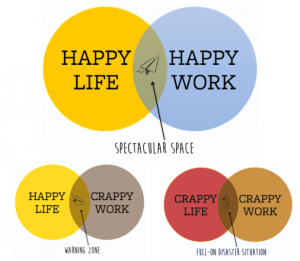 Christine, a senior-level leader in the Midwest, was raised to believe that work was a means to an end (an end which happened to involve nice things like nice homes and nice schools and nice shoes with red soles). She couldn’t shake the feeling of being tethered to her job– a 60-hour a week role that didn’t excite her but afforded the nice lifestyle. She found a new gig that still required long hours, but as she described them, they were the right hours. Living her full life in the zone was worth the search and the meager 3% income reduction. (Between us, she’d have taken her new job for 20% less. Being in the zones– plural­– was so worth it to her.) To what extent are you ‘in the zone’ at work, life, and in the overlap?

One of the things we live and breathe at Happy Spectacular is that work — the right work for each one of us — can make an incremental difference in just how spectacular our lives are. We don’t believe that work is a full or part-time chunk of our lives that we can compartmentalize and pretend doesn’t infiltrate the rest of our hours. We spend too significant a part of our lives at the thing we call work to not do everything we can to make it pretty darned great. Join us in the revolution to kill off the bad career!

If you’re happy with what you do and know your job a key ingredient in your life, tell the world (or us in the comment section). If you know your work is detracting from your life, or at the very least keeping it exceptionally average, may you be inspired by the stories of others to spark the change that can make your life so very much better.

*When someone tells me something like “THIS JOB IS KILLING ME”, and not in a jokey-jokey voice, I’m so going to refer back to that quote when they get scared about the prospect of making a job change and say things like “yeah, it’s not that bad”. I guess use clients’ words for them, not against them. That sounds better.

**I say that line to my hairstylist a lot.
***As always, all client names changed, of course…